Now I know my A, B, C, D, DD (or E), DDD (or F), or do you?  When it comes to bra cup sizes, many think the further into the alphabet, and or more letters, the larger.  But it’s not quite that simple, in fact, cup size, as described by this sequence of letters, is completely relative, to band size that is.

What does cup size mean?

Cup size is based on a simple measurement, that of the difference between ones band measurement and ones chest measurement.  By subtracting the former from the latter, you get a number of inches that corresponds to a letter cup size, for example, an A cup means your breasts are lifted an inch of your chest, a B cup means they are lifted 2 inches off your chest, and so on and so forth, per the below chart: 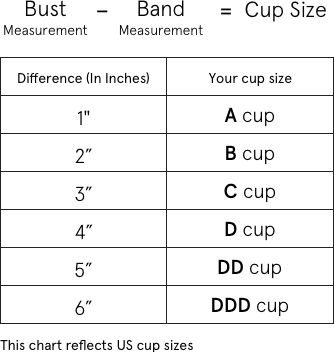 Therefore, one woman can be the same cup size as another, but due to their band size have a very different appearance.  Sister sizing as it’s called, plays a role in this as it relates to cup volume.

Cup Volume is Different Depending on Band Size

Starting with the primary measurement (band size is ultimately most important as the band, not the straps, should be responsible for most of the support needed by the wearer), the numerical representation of the circumference around ones ribcage, just underneath the breasts, gives a band size, typically in the range of 30-44.

In the end, these sizes deliver the same cup volume, or the amount of breast tissue that this size bra is meant to contain and support.  To find your sister sizes, use the chart below and find your current bra size, then go up or down depending on the issues you may be experiencing such as gaping (try going up a band, down a cup) or spillage (go down a band, up a cup). 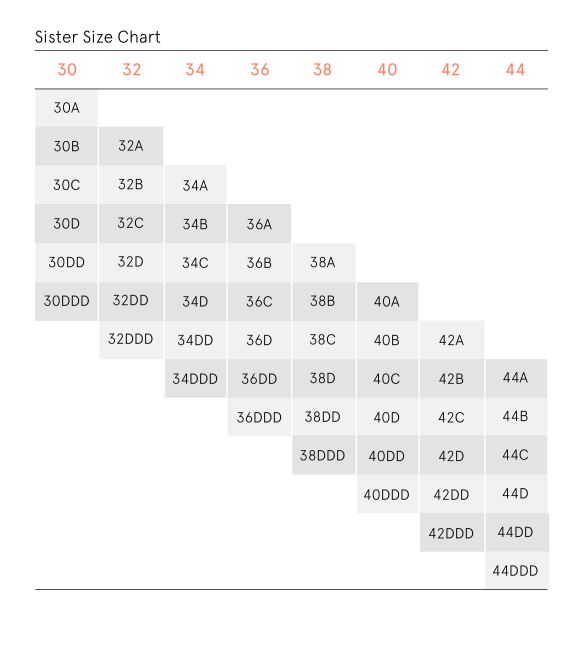 What’s the difference between D and DD?

If that wasn’t enough to potentially confuse you (but don’t let it, we’re here to help!), everything seems so straight forward until we get past D cup…then the duplicates and letter skips come into play (especially for European brands).  For a long time, the bra industry, and many of its largest brands, simply didn’t offer sizing much past D cup.  When they did start offering larger cup sizes, perception issues around larger sizes caused them to avoid going to the next letter and instead, the duplication began, with the original being DD.

As such, this size inherited a reputation for being HUGE (which it’s not, again, we’re only talking about a 5” difference between band and bust here), and it was incorrectly thought that only full figured women would require such a size (or larger).  In reality, the size difference between D and DD with same band size is 1”, the same measurement difference as between an A cup and a B cup, a B cup and a C cup, a C cup and a D cup. Assuming any of these cup differences are on the same band size, one would only appear slightly larger than the other, sticking out an additional inch.

Bottom line: take your measurements every time you shop for a new bra (many factors can affect sizing during ones lifetime), and don’t worry so much about the perception of a letter.  Simply use it to help you find your perfect fit, and don’t forget to leverage sister sizing to your advantage as well