We’ve all heard of the “unibrow,” the loss of a distinct center space between one’s eyebrows, trademark of Frida Khalo and more than a few of our own grade school class photos.  But most of us sought to remedy this situation as we grew up, whether plucking or waxing, to create shape and definition.  It’s much the same for “uniboob,” a preventable condition that can be remedied by choosing the right style and size bra.

The term “uniboob” refers to the situation in which breasts are pushed together so tightly they appear as one.  Not only is this typically undesirable from an appearance standpoint, but it can also be wildly uncomfortable, causing side effects such as excess sweating and chafing that can irritate skin and cause rashes or in extreme cases, yeast infections.

Uniboob is most often caused by a lack of support in an unstructured bra style, or one that attempts to make breasts look smaller by restricting rather than uplifting.  The sports bra is often the worst offender in causing uniboob but styles such as shelf bras, minimizer bras and even some seamless t-shirt bras can also cause the issue if not sized appropriately.

While the bra has its origins in sport, the evolution of this style has greatly lagged in some cases, leading to many frustrations for women looking to manage movement during exercise.  Look for an offering with a built in cup separation (often called encapsulated or contour) and an actual closure (whether back or front) vs the pull over your head style. Closures help regulate size, especially helpful for those with more to manage.  Depending on your preferences, a v-neck structure and/or compression bra may also help shape and separate breasts during activity.

Bras with No Cups

T-shirt bras which tend to be seamless can also be a culprit.  Their comfort and versatility under tighter tops and dresses may lead you to wear them too frequently and since they aren’t structured they tend to lose shape quicker than seamed styles, which can lead to the uniboob appearance.

In a similar fashion, shelf bras lack separation between the breasts and therefore push everything towards the center.  They’re often found in strappy tank tops which don’t allow for selection of proper band size and also typically lack coverage.  While a convenient clothing option, the inconvenience of increased boob sweat and uniboob appearance may outweigh the benefit of combining two clothing items into one.  Solution?  Look for a tank design that features built in cup separation.

Women seeking to downplay a larger chest may try a minimizer bra, however these styles often compress one’s chest, causing a less firm overall appearance. Instead, look for styles that help to shape, lift and create a taller, slimming silhouette.  A center bust line offers ample support and prevents movement whether for exercise or everyday wear.

Ultimately, preventing the dreaded uniboob, as well as the boob sweat (and worse) it creates, comes down to a few key factors: cup separation, accurate bra sizing and proper adjustment of bra straps and band. 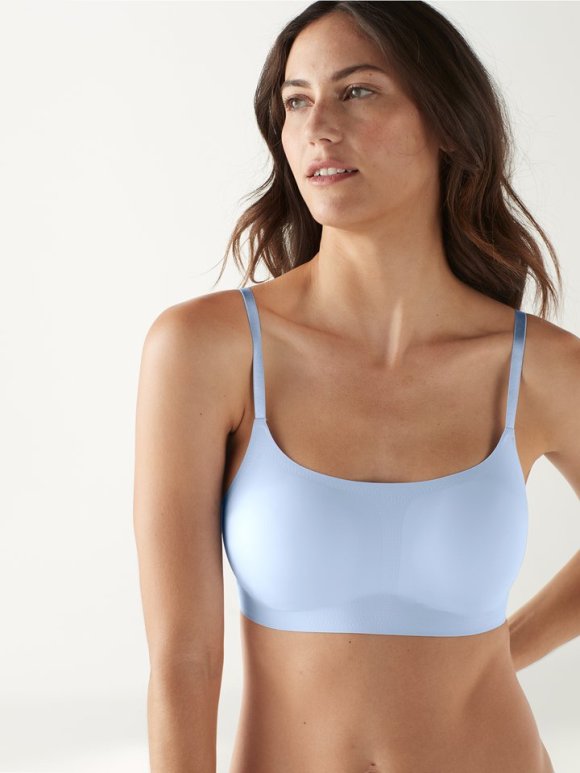 The easiest way to avoid the appearance of one large boob is to ensure there is definition for each.  Many bra styles now offer this without reliance on underwire, especially the True Body collection, which includes bras, tanks and bodysuits all with removable pads.

Ensure You Have the Right Size

Also important is to accurately measure both your band and cup and find the right style to complement your size and shape. It may be helpful to take new measurements each time you shop for bras as many factors affect size fluctuations (pregnancy and nursing, weight gain and loss, etc).

Lastly, once you have a style you love in the right size, ensure the bra fits correctly by making adjustments as needed to both the straps and band. Regular wear will cause the band to stretch over time, which is why you should always start the clasp on the loosest setting, and begin thinking about replacing the bra when you find you need to use the tightest closure.  Washing can also affect bra straps, even when done as gently as possible.  Adjust straps to ensure a snug fit without digging in or slipping off, and remember that the band is what supports the weight of your breasts, not the straps. Each strap can be adjusted however feels best, which may mean they aren’t exactly even, one may need to be tighter to achieve your best fit.

Home > What Is Uniboob